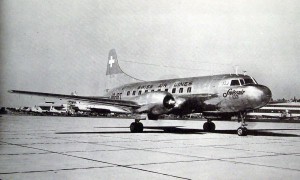 Stumbling upon a photo set from the Castle Air Force Museum my attention was captured by a static display of an old Convair 240. In reading the descriptive caption I realized that I was looking at some aviation history that I had been close to. Further searching revealed documented early days of this Convair 240-11, c/n 133:

From this Museum find, the end of the story is now complete. But as with most accountings there is usually a gap from when a machine becomes unprofitable, aged and rejected until it is scrapped or rescued. In the instance of this old plane however, I can complete the story.

1977 – an adventure, by my account: continue reading about c/n 133 and the Great Valley Travel Club…

Convair c/n 133 has been refurbished and currently is displayed at the museum with HC-131 Samaritan transport livery.